On This Day: Robert Schumann

HERE ARE TEN FACTS TO  KNOW ABOUT Robert Schumann:

You write to become immortal, or because the piano happens to be open, or you've looked into a pair of beautiful eyes.

Here are ten facts you should know about the composer, pianist and music critic who was one of the most influential figures of the Romantic era.

1. Schumann, who was the youngest of five children, was born in Zwickau, Saxony. His father was a bookseller, publisher and novelist so he was immersed in literature at a young age. When he was seven Schumann began studying general music and piano and immediately displayed great skill and aptitude.  2. His father, who had encouraged his interest in music passed away in 1826 so in 1828 Schumann left to study law in Leipzig under pressure from his mother. Whilst there, However, he took lessons in composition and also the piano with the well-known music teacher Friedrick Wieck.  3. A pivotal moment for Schumann occurred in 1830 when he heard violinist, violist, guitarist and composer Niccolo Paganini perform in Frankfurt. He wrote to his mother ‘My whole life has been a struggle between Poetry and Prose, or call it Music and Law’. With her permission he immersed himself in his piano studies with Wieck. However, he injured his hand permanently, reportedly due to the use of a finger strengthening device, so he abandoned the piano to focus on composition.  4. With his focus on compostion, the following fruitful period produced some of his best-loved works such as the piano cycles Papillons and Carnaval (composed 1833-35) and the Études Symphoniques (Symphonic Studies 1834-37).  5. In spring of 1834 Schumann published the first edition of Die Neue Zeitschrift für Musik (New Journal for Music). In his writings Schumann campaigned to revive interest in the composers of the past such as Mozart, Beethoven and Weber and praised some modern composers such as Chopin and Berlioz. But he was highly critical of the new popular direction music was taking and blasted its proponents as philistines. 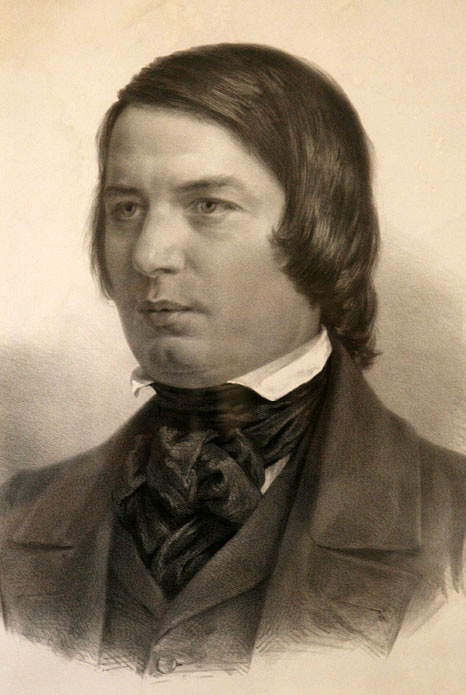 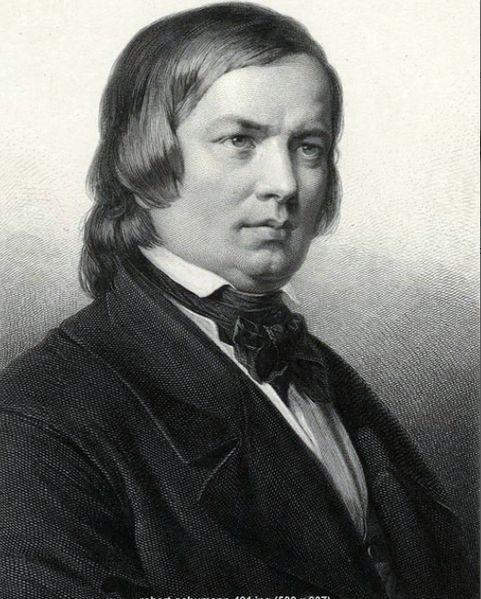 6. In 1837 he published his Davidsbundlertäntze (Dances of the League of David), a group of 18 pieces for piano. It is named after the Davidsbundler, a music society he created in his writings, inspired by real and imagined literary societies. A reflection of his rich interior life, the fictional music society was created to defend the cause of contemporary music against its detractors and numbered kindred spirits such as Chopin and Paganini.  7. Schumann fell in love with Clara the young daughter of his teacher Friedrick Wieck and in 1837 asked for permission to marry. Her father objected and the couple did not marry until 1940 when Schumann went to court to set aside Wieck’s legal objection to the marriage. The marriage was a remarkable partnership, with Clara (herself a talented pianist) acting as inspiration, critic and support to her husband. She kept up a demanding concert schedule despite bearing eight children.  8. Having focussed mainly on piano works, in 1840 Schumann returned to the song format and that year composed nearly all the titles he is most famous for, including the cycles Myrthen (Myrtles), the two Liederkriese (Song Cycles), Dichterliebe (Poet’s Love) and Frauenliebe und Leben (Woman’s Love and Life). He went on to compose many lieder, chamber, choral and orchestral works in addition to his only opera Genoveva, which was premiered in 1850.  9. In September 1853, a young Johannes Brahms arrived at the Schumann household with a letter of introduction from the violinist Joseph Joachim. He amazed husband and wife with his music and stayed with them for several weeks, becoming a close family friend. Schumann was a great supporter of Brahms and regularly praised him in Die Neue Zeitschrift für Musick.  10. Schumann had always suffered with his mental wellbeing. He had contemplated suicide on several occasions and from the mid 1840s he suffered severe bouts of severe depression. In 1854 he attempted to drown himself and when saved insisted he be institutionalised for Clara’s protection. He died on March 4 1856 in a private asylum near Bonn.