And then I asked him with my eyes to ask again yes and then he asked me would I yes and his heart was going like mad and yes I said yes I will yes.

Today is Bloomsday, the day when Joyce fans around the globe remember the lauded scribe and his great tome Ulysses. Music was hugely important to Joyce, here we look at its role in his work and life and celebrate the lesser-known musician and music-lover.

‘Strange, almost incredible as it may seem now to his admirers, Joyce was more intent on becoming a singer than a writer.’ Oliver St. John Gogarty – James Joyce as a Tenor (from Imitations)  James Joyce is one of the most influential literary figures of all time. As hard as it is to believe, his musical ambitions once rivalled his epistolary enthusiasms but if we look closer the evidence is plentiful in his prose. Think of The Sirens episode in Ulysses, the prominence of ‘The Lass of Aughrim’ in The Dead, the fact he took the title of Finnegans Wake from a folk ballad and named his poetry collection Chamber Music.   So where did this great romance begin? Joyce was immersed in music as a child. His father was a noted singer and his mother an accomplished pianist. The Joyce household were lovers of ballads by Irish composers such as Thomas Moore, the operas of William Balfe and traditional ballads. All the children were encouraged to sing and the young James’ party piece was a ballad called ‘Hounihan’s Cake’, interestingly his brother Stanislaus favoured ‘Finnegans Wake’. At the age of six James was deemed talented enough to join his parents at an amateur concert in Bray. His love of song blossomed and by the time he left University College Dublin, he knew most of the songs of Shakespeare’s plays and many English folksongs collected by Cecil Sharp. 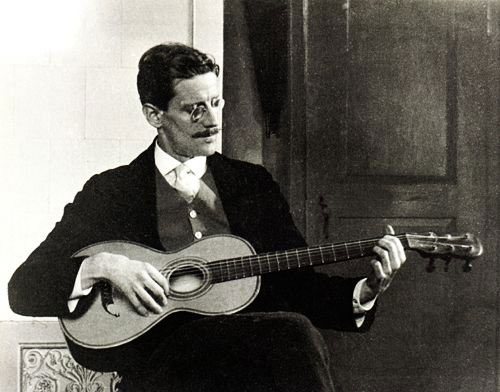 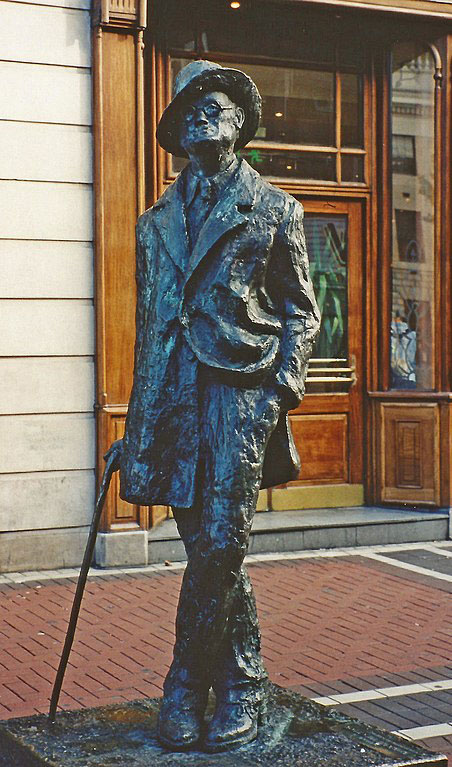 Joyce’s singing aspirations were such that in 1904 he entered the annual Feis Ceoil competition which had been won by John McCormack the previous year. In preparation, he took singing lessons from Vincent O’Brien and moved into rooms at 60 Shelbourne Road where he hired a piano to rehearse for the competition.   The competition took place in the Antient Concert Rooms, Dublin on May 16. In addition to singing ‘Hear ye, Israel’ from Mendelssohn’s Elijah and an Irish Air ‘Lullaby’ (arranged by Standford) participants were required to sight read a previously unseen score. On the day, Joyce walked off the stage at this point. Apparently, the judge, Professor Luigi Denza, had intended to award Joyce gold until this juncture. He came third. Joyce gave the bronze medal to his Aunt Josephine and today it is owned by the dancer Michael Flatley. According to the review of the competition in the Irish Daily Independent, ‘Mr. Joyce showed himself possessed of the finest quality voice of any of those competing…’  Joyce took part in a concert in the autumn of that year during Horse Show Week. Titled the Grand Irish Concert, the first tenor is listed as JF McCormack and the second tenor as JA Joyce. His singing activities petered out thereafter.   But his love of music remained with him and his works are imbued with its essence. Many of his characters are brought together by a common love of music; singers, songs, concerts and composers are mentioned frequently. 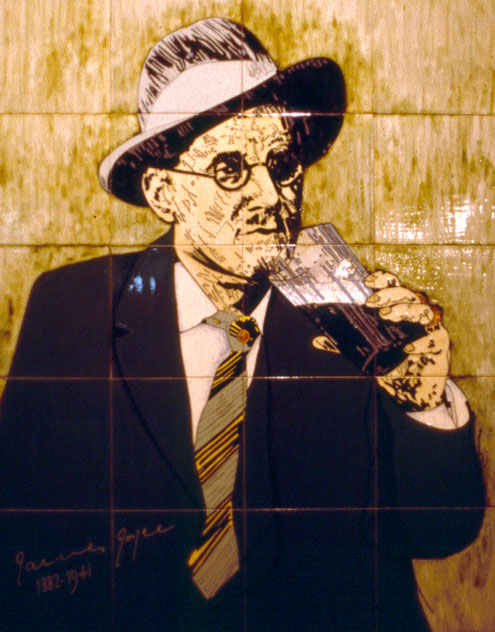 The Dead is set in a musical household and during the evening over which the story unfolds there are many memorable musical moments. The most affecting of which occurs when a guest professional tenor performs ‘The Lass of Aughrim’ - a song that Joyce learned in traditional style at his mother-in-law’s kitchen table - which is integral to the plot.  Music also casts a long shadow in Ulysses, it is the profession of two of the central characters; Molly Bloom is a singer by trade and Blazes Boylan is a concert impresario. An entire episode of the book is devoted to music; The Sirens is set in a hotel bar where Simon Dedalus sings sentimental nationalist songs. Indeed, the numerous songs incorporated into the narrative of Ulysses are central to the book. For example, the song most prevalent in The Sirens episode is ‘The Croppy Boy’ which aids Joyce to weave in themes such as Ireland’s political history, loyalty and betrayal.   The most frequently mentioned song in Ulysses, ‘Seaside Girls’, deals with temptation leading to downfall - ‘In bloomers smart they captivate the heart’. Leopold Bloom, who regularly references the song, himself seems to be constantly under the spell of female wiles. Elsewhere ‘Love’s Old Sweet Song’ which Molly Bloom will perform on her concert tour serves as a leitmotif of both her infidelity and potential rapprochement with Bloom.  Joyce took the title of his last novel, Finnegans Wake, from an Irish-American comic ballad first published in 1864. The text of the book iis peppered with references (veiled and direct) to musical pieces including Thomas Moore’s ‘Silent O Moyle’, ‘I Dreamt I Dwelt In Marble Halls’ from one of Joyce’s favourite operas Balfe’s The Bohemian Girl and ‘M’appari’ from Friedrich von Flowtow’s Martha – a song his father sang often.

In addition to these references Joyce also composed a song for the book ‘The Ballad of Persse O’Reilly’. In the novel the song is penned by a shady character called Hosty and is described as ‘a scurrilous rann against H. C. Earwicker, which recounts the All-Father's fall from grace’. The Dubliners recorded a version of the song for their 1969 album At Home with The Dubliners.  Finnegans Wake also inspired music. In 1971 Samuel Barber composed ‘Fadograph of a Yestern Scene’, a quote from the first part of the novel, in 1979 John Cage created his ‘Roaratorio, an Irish circus on Finnegans Wake’ and in 1980 Japanese composer Toru Takemitsu titled a piano concerto ‘Far calls. Coming, far!’ From the last page of the novel.  Joyce himself is frequently namechecked and referenced in popular culture. In 1988 The Pogues used James Joyce on the alternative cover of their album If I Should Fall from Grace with God. It depicts the group’s members standing in a line with each of their faces superimposed onto a picture of the writer. 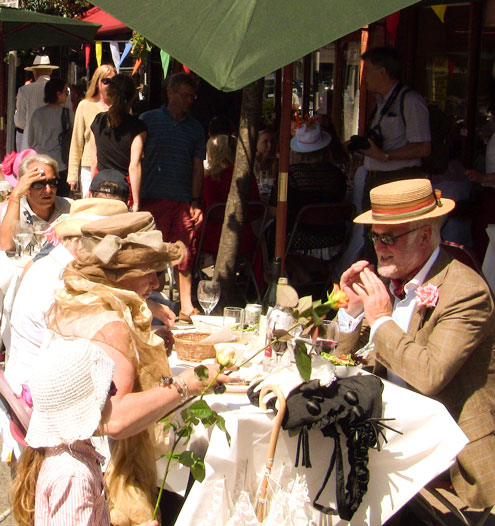 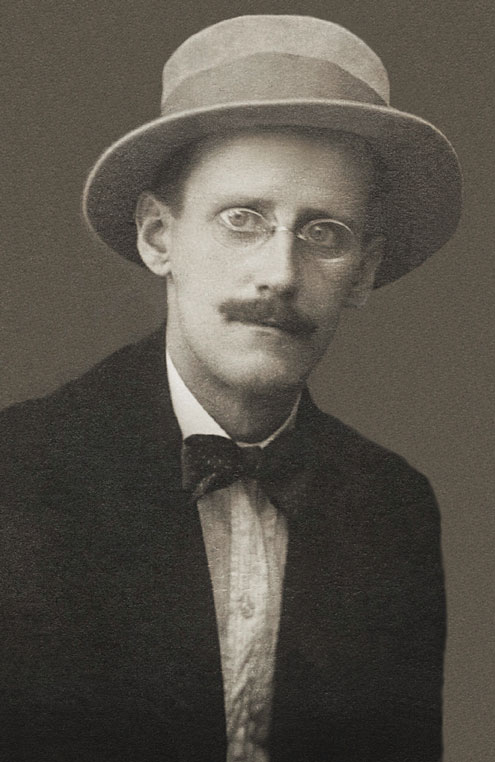 References to Ulysses are also numerous. They include Lou Reed’s 1982 song ‘My House’ which features the lines ‘My Daedalus to your Bloom, Was such a perfect wit’ and Kate Bush’s ‘Flower of the Mountain’ from 2011’s Directors Cut. The album is a reworking of earlier songs and here she replaces the songs’ lyrics with a passage from Ulysses.  Joyce himself sang and played piano and guitar throughout his entire life. When he took up residence in Trieste one of his first priorities was to find a good piano – the original is on display at the Dublin Writers Museum. He would have owned and used this piano while writing Dubliners and A Portrait of the Artist as a Young Man, and when he started Ulysses in 1914. In addition, the guitar he owned and played in Zurich is now at the James Joyce Tower in Sandycove.  So this Bloomsday remember not only Joyce’s great contribution to our literary lives but the importance of music on his. And the intrinsic role it played in his work.